﻿
﻿﻿﻿ ﻿I spent ten (!) hours in the studio - the first day of recording on the lullaby CD. It's really good to be directing this little project, and I have the help of some fine musicians, too. In addition to the musicians I mentioned below I'm also getting help from Kevin Russel, Phil Lawrence, Lindalou Ryge, and Kim Atkinson. The songs are starting to take shape very beautifully. A few pictures from the recording day at Prairie Sun... 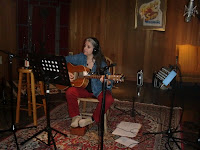 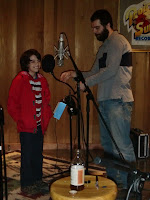 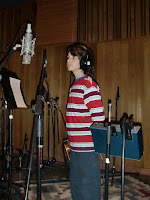 FEBRUARY 2011:
This page is under construction, but so far I can tell you I am recording this lullaby CD at Prairie Sun Studio in Cotati, California. The title will be "Twilight Comes Tiptoeing." Some of the musicians playing on it are: John Rothfield, Maple Profant, Bonnie Barnum, Loren Gillogly, and Ted Dutcher, and there will be a few others. We are gearing up for recording very soon!
Here's the songlist:
Twilight Comes Tiptoeing
Close Your Eyes
Nani
Sweet Sweet Wind
﻿﻿﻿﻿﻿﻿﻿﻿﻿﻿﻿﻿﻿﻿﻿﻿﻿﻿﻿﻿Rocking on the Sea
Firefly
Roll Away
Si Hei Lwli
The Star of County Down
All but the last two are orginals, written for my son. I'll keep posting new developments...
﻿﻿﻿﻿
Email ThisBlogThis!Share to TwitterShare to FacebookShare to Pinterest
Home
Subscribe to: Posts (Atom)

... is from a TAL house concert in New Hampshire, June 2010. I wrote "Stories" for my mom. The video is pretty rough and scratchy, but the love is there!

The second video is another song of mine, "I Wish," from a Comcast "Battle of the Bands" performance in 2009. The song was just brand new then.

What's this blog about?

Ginger
Welcome! I'm Ginger Parish, Singer/ Songwriter, founding member of the Indie Folk/Americana trio Three At Last, and Director of Santa Rosa Area Music Together. I'm currently working on a CD of lullabies, mostly original. It's a work I have dreamed of doing for a long time! I will post current news about the lullaby project as I have it. Please look at the pages at the top for more on Three At Last (now disbanded), Music Together classes, and other stuff. I have never had all my musical pursuits in one place before! I plan to use this blog to keep updating my musical projects. Thanks for visiting!